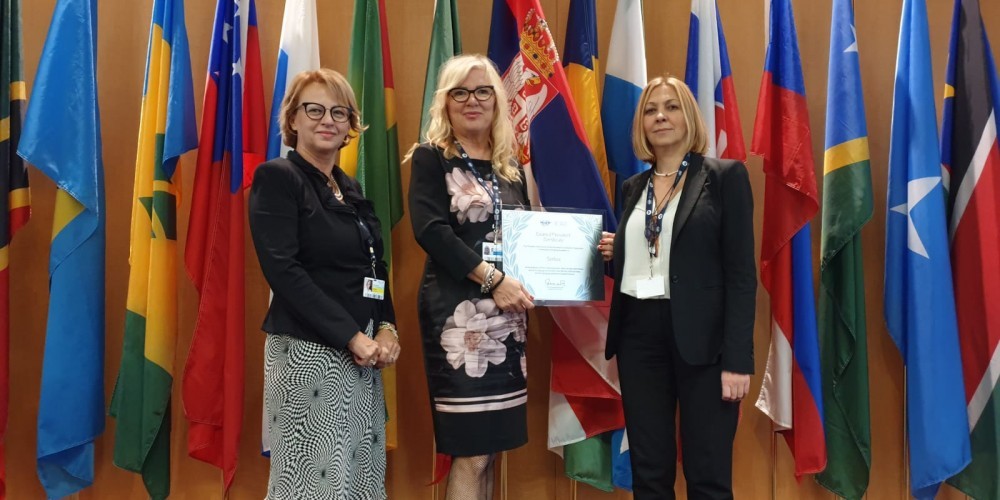 The Civil Aviation Directorate received a sertificate from the ICAO Council at its 40th triennial meeting for implementing aviation security standards and best practices and addressing deficiencies in 2018, the regulator announced.

From March 19 to 26, 2019, the International Civil Aviation Organization (ICAO) assessed the work of the Civil Aviation Directorate of the Republic of Serbia (ICAO Coordinated Validation Mission) in evaluating the entire Serbian civil aviation system and found 93.33% compliance level of the aviation system, which is an improvement of 27.31% compared to the audit conducted in 2009.
The ICAO assessment included verification of compliance of laws and regulations with the provisions of the Chicago Convention and its annexes under the LEG protocol, which found 95.24% compliance; certification of flight personnel and training center certificates under the PEL protocol, which found 97.59% compliance; and operations under the OPS protocol, which found 96.69% compliance. The validation also covered airworthiness under the AIR protocol, where 93.46% compliance was found; and airports and ground handling under the AGA protocol, where 91.11% compliance was found.
Mirjana Cizmarov, Director of the Directorate, stated that the ICAO validation proves the quality of Serbian civil aviation in a very concrete way: With the achieved result, the Republic of Serbia is currently among the top ten countries in the world leaving other countries behind, such as Germany, Italy and Switzerland. ICAO is an international regulatory benchmark for safety standards and procedures, which evaluates standards in an exclusively impartial manner. This year's ICAO audit is proof that the entire civil aviation system of the Republic of Serbia has made tremendous progress, which is an indication of the dedicated work of government and private entities.
The Civil Aviation Directorate, together with the Ministry of Construction, Transport and Infrastructure, is primarily responsible for helping the entire aviation industry achieve and maintain rigorous safety and operational standards by providing oversight. This is a kind of recognition for our joint team and a guarantee that passengers in Serbian aviation are safe and receive world-class service.
As reported by this regulator, during the ICAO visit in 2009, the International Civil Aviation Organization made 182 findings relating to the deficiencies in implementing the critical elements of the government oversight function, resulting in an overall score of 66.4% for the entire civil aviation system in the Republic of Serbia.