Serbian Prime Minister Mirko Cvetkovic said today that significant resources were to be invested into improving air services infrastructure in Serbia, and that all European standards are to be met in this mode of transport.

At a ceremony held at the Aviation Museum of Serbia in a celebration of the centennial of Serbian civil aviation and entry into force of the new Air Transport Law, Mr. Cvetkovic said that efforts would be made to improve the network of airports in Serbia and conditions created to make Batajnica, Ladjevci, Ponikve, Vrsac and Bor airports for regional air services.

The Prime Minister has announced investments in the development of "Jat Tehnika" facilities dealing with aircraft maintenance and repair.

The minister of Infrastructure, Mr. Milutin Mrkonjic said that the day marking the centennial of Serbian aviation coincided with the new air transport law thus preparing Serbia to make further improvements in this mode of transport.

Head of EC Delegation to Serbia, Mr. Vincent Degert said that Serbia made significant progress in adopting European standards by implementing the new air transport law and reiterated that this would be reported in the EC report on Serbia's progress.

Mr. Degert said that thanks to the implementation of Open Skies agreement, the Schengen visa abolition, and entering of new airlines to Serbian aviation market Serbian citizens would be able to use low-cost companies at significantly lower prices.

The importance of the Air Transport Law was discussed by the representatives of the working group which participated in drafting of the new law, i.e. State Secretary of the Ministry of Infrastructure, Mr. Miodrag Miljkovic, Director of Civil Aviation Directorate Mr. Nebojsa Starcevic and Chairman of the Board of Serbia and Montenegro Air Traffic Services Agency, Mr. Nikola Stankov. It was unanimously agreed that the new law in addition to the rapid development of air transport would contribute to even greater aviation safety being the primary task of all interested parties.

A historian Cedomir Janic discussed  a tremendous aviation past in Serbia, pointing out the exceptional bravery of Serbian aviation pioneer Ivan Saric. Namely, Saric carried out the first public flight on 16 October 1910 in Subotica in the self-made aircraft.

Mr. Mrkonjic took the opportunity to present the Prime Minister with the model aircraft just as the one Ivan Saric used a hundred years ago to take off, laying down the foundations for Serbian aviation, making Serbia one of the first countries in the world with a history in aviation. 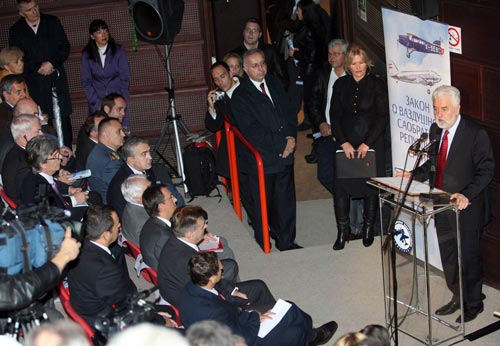